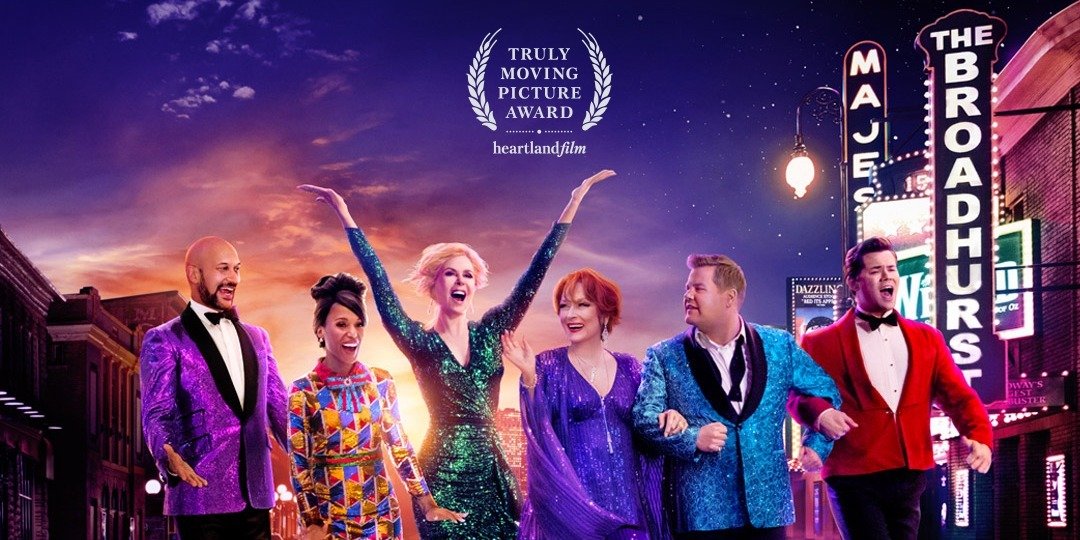 FRIDAY, DECEMBER 11, 2020
(DECEMEMBER 11, 2020) INDIANAPOLIS – The new Netflix film releasing today, “The Prom,” from Director Ryan Murphy and starring Meryl Streep, James Cordon, Nicole Kidman, Jo Ellen Pellman, Ariana DeBose, Keegan-Michael Key, Andrew Rannells and Kerry Washington, is the recipient of Heartland Film’s Truly Moving Picture Award. Since 2010, the Award has honored nearly 200 studio-released films and serves as a curatorial standard – assisting moviegoers to identify impactful films that do more than just entertain.
“The Prom” – a spectacular, big-hearted film adaptation of Chad Beguelin, Bob Martin and Matthew Sklar's award-winning, Tony-nominated Broadway musical – is about down-on-their-luck Broadway stars who shake up a small Indiana town as they rally behind a teen who wants to go to the prom with her girlfriend.
“We believe films have the ability to inspire and change perspectives, and we’re honored to present the Truly Moving Picture Award to ‘The Prom.’ The ensemble cast, humor, and message of acceptance and discovery make it a perfect movie for this moment,” said Heartland Film Artistic Director, Greg Sorvig.

“On behalf of ‘The Prom,’ we are so honored to receive this year's Truly Moving Picture Award! Thank you for all of the work you are doing to further arts education and outreach in the great state of Indiana. As someone who grew up and currently lives right next door in Ohio, I know firsthand the impact that thriving local arts organizations can have on the lives of young people. Thank you for including us in your mission,” said leading actress, Jo Ellen Pellman.